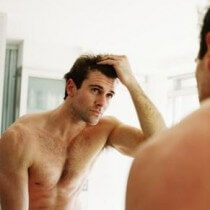 This is not a story about losing your hair gracefully. Instead, it is about men who in their early twenties looked in their mirror and saw their hair thinning. You can figure, that they probably be bald by their thirties, a time that should be the pinnacle of a man’s earning power and social prowess. Transplant technology is improving, but the idea of having the follicles rearranged in a $20,000 surgical shell is not for everyone’s pockets.

Here are some very successful ways to keep your hair for longer.

Minoxidil (now marketed as Rogaine) had hair-sprouting potential, asks your pharmacist to grind the pills into a solution and then shot it onto the scalp with a syringe. Minoxidil is the only topical preparation approved by the TGA for male-pattern hair loss. Researchers are not sure how it works, although some theorise that it dilates blood vessels in the scalp. Applied twice a day, the solution makes hair grow longer and thicker, even stimulating new growth in a lucky few. Minoxidil comes in two formulations, 2 percent and 5 percent. “I don’t see any value in opting for the 2 percent strength,” Dr. Novick says. “If you’re going to go for it, use the 5 percent. The worst that can happen is it doesn’t work.” As with finasteride, you are looking at a lifetime commitment. Stop treatments, and any hair you have regrown is headed back down the drain. Dr. Novick has some patients add Retin-A, which contains tretinoin, the acid form of vitamin A. “Retin-A also seems to work in combination with minoxidil,” he says, perhaps for the same reason: It dilates blood vessels. What’s more, it may help make the top layers of skin more permeable, which aids in the absorption of minoxidil, Dr. Novick says.

Finasteride is a drug that blocks a hormone implicated in genetic hair loss. Convince your doctor to give you a prescription for that, and use the treatments in tandem. Finasteride (marketed as Propecia and other brands) is the first drug proved to inhibit the formation of dihydrotestosterone (DHT), a hormone that shrinks hair follicles. This little pill slows—and even reverses, in some cases—the progressive miniaturization of hair follicles that ultimately leads to a baldhead. You will need to take it once a day for the rest of your life. Finasteride seems to not only slow hair loss but also prompt “cosmetically significant” new growth in some patients, says Nelson Lee Novick, M.D., a clinical professor of dermatology at Mount Sinai School of medicine in New York City. Try a one-two punch: “For men in the earliest stages of hair loss, I find that combining these therapies retards hair loss 95 percent of the time and grows new hair at least 50 percent of the time.” Save money: A month’s supply of Propecia costs about $90, and it will not be covered by insurance. But if you ask your doctor for the prostate drug Proscar instead, you will pay a quarter of the price. Each Proscar pill contains 5 milligrams (mg) of finasteride. (Propecia has 1 mg.) Use a splitter to divide the pill into four pieces. Take a quarter of a pill each day, says Gabe Mirkin, M.D., a dermatologist and medical director of Mirkin Medical Consultants in Kensington, Maryland.

If you are not seeing results with Propecia, you may benefit from another DHT blocker, one that targets the hormone in hair follicles more selectively. Prescribed for prostate enlargement, dutasteride (marketed as Avodart) comes in a 0.5 mg pill. Several years ago, manufacturer GlaxoSmithKline conducted Phase II clinical trials on this drug as a hair-loss remedy. Participants given a 2.5 mg daily dose of dutasteride grew two to three times more new hair than those given 5 mg a day of finasteride. (Those doses were five times the amount of dutasteride and finasteride in Avodart and Propecia, respectively.)

“After Propecia, typically, I would start a patient with 0.5 mg Avodart, and track the results and monitor for side effects for a few months,” says Alan Bauman, M.D., medical director of Bauman Medical Group, a hair-restoration practice in Boca Raton, Florida, adding that off-label treatments must be accompanied by a discussion of risks and benefits. “Sometimes, we’ll then move to a 2.5 mg dose. It seems to work a little faster and a little better.” While the 0.5 mg dose suppressed scalp DHT levels by 60 percent in clinical trials, the 2.5 mg dose dropped them 82 percent.

A personal laser beam that grows hair might sound like a James Bond invention. Yet the TGA has confirmed that the handheld HairMax Lasercomb ($495), which administers low-level laser therapy [LLLT], actually works. (It should be noted, however, that the TGA approval process is less stringent with devices than with drugs.) The Lasercomb seems to energize the mitochondria, or “power plants,” in cells. In turn, this may switch hair follicles from their resting phase to their growing phase. Log three 10- to 15-minute sessions each week, and you should see results in 3 to 4 months. For a stronger effect, try the laser apparatus offered at some hair-loss practices. “These [LLLT] machines convert 70 percent of hair follicles from the resting phase to the growing phase,” says Robert Leonard, D.O., founder and chief surgeon of Leonard Hair Transplant Associates in Rhode Island. Dr. Leonard recommends a year of sessions, starting with twice a week and eventually scaling back to once a month. (Expect to pay $1,750 to $3,500 for the full year.) Patients typically see diminished shedding after the third month. At the end of the year, you are done—unless you begin to notice more shedding. “Those individuals can either use the handheld device or come in on a maintenance schedule—usually every 1 to 3 months,” Dr. Leonard says.

You can reject all the above and be proud of your baldhead as I am.