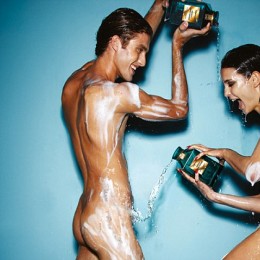 Modern men embrace the ‘bare down there’ trend: 1 in 3 males now wax their crotches as part of their grooming routine

With everything from manicures to chest waxing now considered key parts of the male grooming repertoire, it’s no surprise that the trend for going ‘bare down there’ has a growing number of fans among men.

Once considered taboo, ‘manscaping’ has become increasingly acceptable thanks to the presence of waxed men in the media, and also the antics of TOWIE stars such as Mark Wright and Joey Essex.
Now, according to a new survey, more than a third of men are happy to admit they make an effort to get rid of hair in their crotch area.

Tidy: Even rugby players such as former England captain, Mike Tindall, have fallen prey to the lure of grooming

The survey, carried out by the Skin Health Alliance, found that 31.7 per cent of men pluck, shave or wax their nether regions, while another 10 per cent admitted to tackling their hairy backsides.
Other popular targets for hair removal areas included the eyebrows (28.8 per cent ), the chest (20.1 per cent), the back (12.9 per cent ) and the ears and nose (41 per cent).

Less than a third (28.8 per cent ) said they preferred the natural look and didn’t wax anything at all.
To anyone living in Essex, this will come as no surprise, as the county is the home of the ‘pejazzle’ – the male version of the ‘vajazzle’ – a beauty treatment that involves removing all hair from the crotch and replacing it with decorative crystals.
Among those to confess to a spot of pejazzling was TOWIE star Mark Wright, who told the MailOnline that he was ‘keen to speak out’ for men who like a bit of decorative waxing.

Groomed: Campaigns featuring waxed men, such as this one for Tom Ford, have helped to change attitudes.

‘Women don’t necessarily want a rough and ready man,’ he revealed. ‘Some prefer a man who’s groomed and takes care of himself. It’s each to their own.’
What’s more, added Wright, male intimate grooming is a nationwide trend.
‘It’s actually more likely to be men outside of Essex that want to bling up to be a bit more Essex. If you’re actually from Essex, you don’t need to try as hard with all the Essex accessories. Any good looking bloke can wear pejazzles,’

Whether your man pejazzles or not, Wright is certainly correct that intimate waxing is a growing trend, with the study showing that UK men are fast catching up with men in the US, where a whopping 73 per cent shave their crotch area.

One of the respondents to the survey, 28-year-old James Stalley from London said: ‘I like to take personal pride in my appearance, and a hairy back – or worse – is just not a good look.
‘Men expect women to be well groomed and in this day and age they should expect no less from us.’
Annoyingly, the increasing popularity of male grooming has had a knock on effect for women, with almost three quarters of men admitting that they pinch their partner’s beauty products.
While most confessed to stealing moisturiser, over a third said they used their wife or girlfriend’s lip balm and one in ten said they used their anti-ageing products.
James added: ;I’ll happily slap on a bit of my girlfriend’s anti-wrinkle cream, especially when parties and late nights have taken their toll on my skin.
‘She’s more of an expert on knowing what does and doesn’t work, so it makes sense to just use whatever she buys.’